Things to look out for in January:

In January lots of nature is very busy including:

January is also a great time to have a go at planting your own vegetables, you can "chit" some potatoes by growing them from shoots. Keep the potatoes in a cool dry place for 4-6 weeks to let the shoots grow upwards to about 3cm before transferring them into the ground.

What to spot this winter - Visit Herts and Middlesex Wildlife Trust to find out more...

Things to look out for in February:

Each month has a special flower and a stone, in February this is the violet and the amethyst.

In February there are lots of festivals, such as , Imbolc. This is held on the first of February and is a Pagan festival. To celebrate people sometimes make "Bridey Dolls" from corn, these are supposed to bring good luck.

In February it is easy to spot the constellation Canis Major or "The Great Dog". To find it look for Sirius , the "Dog Star".

Things to look out for in March:

In March you can carry on star gazing and see the moon at different phases on the following dates:

On the 5th of March this year it will be Pancake Day or Shrove Tuesday. Why not have a go at making your own pancakes? Or even have a pancake race in the garden?

There are lots more birds and animals to see in March. Look out for Chiffchaffs and Wheatears who are visitors from other countries.

If you want to identify a bird that you do not know, or learn more about them visit the RSPB website. RSPB Bird Identifier 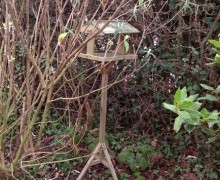 Things to look out for in April:

Colourful spring flowers appear this time of year. Look out for primroses which are usually a creamy yellow colour. If you visit the woods you might be greeted by the beautiful sweet-smelling bluebell.  According to folklore, bluebell woods are woven from spells cast by woodland fairies.

Things to look out for in May:

You might be lucky enough to hear a cuckoo this month. They should have started to arrive after their long journey from Africa. The cuckoo is named after it's call, some people believe spring only truly arrives when the first cuckoo call is heard.

With the weather warming up you should also be spotting more butterflies, why not make a list of the ones you see, if you don’t know their names draw a picture and then do some investigating of your own.

Things to look out for in June:

Look out for wild flowers in the fields and hedgerows.  Trees will be in full leaf, you might be able to identify the tree by looking at their leaves.  Baby birds are beginning to leave their nests and learning how to fly and hunt for their own food.

Things to look out for in July:

July is the time of year to enjoy all the wonderful colours and scents in your garden, local park or woodlands.  You may notice moths visiting flowers at dusk, look out for the Garden Tiger Moth, which can be found all over the UK.

Things to look out for in August:

August is a time to sit back and enjoy all that nature has to offer.

Things to look out for in September:

September sees changes, as summer gives way to autumn.  It can still be warm but as the days are shorter, the nights can be cold. Look out for squirrels collecting acorns, storing them for the winter months.

Things to look out for in October:

Apple season is in full swing.  Animals, such as hedgehogs and dormice are thinking about hibernating.  October is the best season for planting things, ready for picking in the spring.

Things to look out for in November:

Firework Night and Remembrance Day are in November - Remember to look out for hedgehogs that might be hibernating in piles of leaves and wood, take care not to disturb them.

Things to look out for in December:

Robins are very busy singing to protect their territories and finding food.  Birds flock to rivers because the water is less likely to freeze which means there is still a lot of food to be found.